A Recalibration of Agency Life

It’s a bewildering time in the information worker world. The ability to safely return to the office is (hopefully) on the horizon, but we’re not sure when. Business leaders are being forced to make real-time decisions about the future of their “office” with what feels like insufficient data.

Recently, some major corporations put their stake in the ground on different sides of the aisle. Pinterest paid $90 million to terminate a new lease obligation to better support a more distributed workforce. Bloomberg is reportedly paying people to return to their London office with a £55 a day stipend. Publicis CEO Arthur Sadouan clearly stated he doesn’t want to be a “Zoom Company.” And Google is one of many major tech companies where employees will work from home until July 2021.

Before Zoom Ruled Our Lives

Pre-COVID, Camp + King was not a big believer of WFH. Like most agencies, we prided ourselves on work derived from in-person collaboration. We flourished in serendipitous hallway conversations, strategizing on mute during a client call, reviewing creative taped to a wall, and debating Roger’s newest ripped jeans. When someone asked me if Camp + King could operate working from home in February 2020, I would respond that it simply couldn’t be done. I didn’t even have Zoom downloaded on my computer.

Then we went into lockdown. Thousands of businesses became 100% remote. And the entire world pivoted out of necessity.

There was a violent propulsion forward for all businesses. Initiatives that would have taken 5 years took 1 month.

Unlike some of our clients, the agency world is lucky that our services do not hinge on people going to a brick-and-mortar location. Even so, Camp + King (like most agencies) had a hectic transition period as we were launched into remote work.

But we pivoted, adapted, and quite honestly, impressed ourselves. What we found was that working from home didn’t influence the amount or quality of work we produced. We actually produced as much, or more than we had produced pre-COVID. 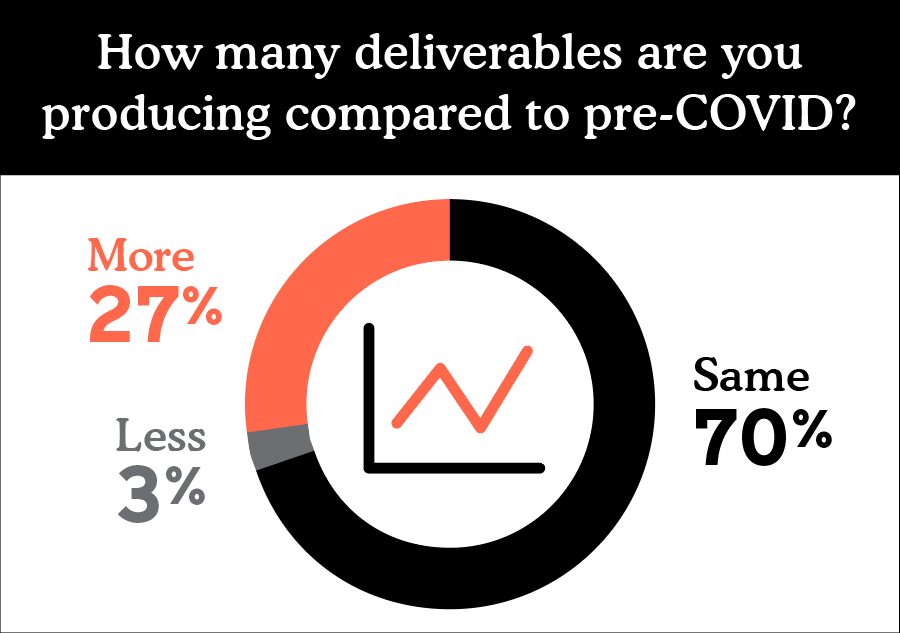 However, productivity alone doesn’t make Camp + King successful. A happy and fulfilled bunch of Camp + Kingers does. As we geared up for a longer haul of working from home it became clear that our violent propulsion forward meant we couldn’t simply go back to the way things were. And with a researcher at the helm of our company – the best way forward was to tap into the agency for guidance on what to do once we emerged on the other side.

We found that we missed humans from a cultural and collaboration perspective. We missed the structure of the day, but liked using our commute time for personal time. We were still working out Zoom presentation kinks, but enjoyed face time with our clients. We felt equally or more productive, but also found it hard to step away at the end of the day. 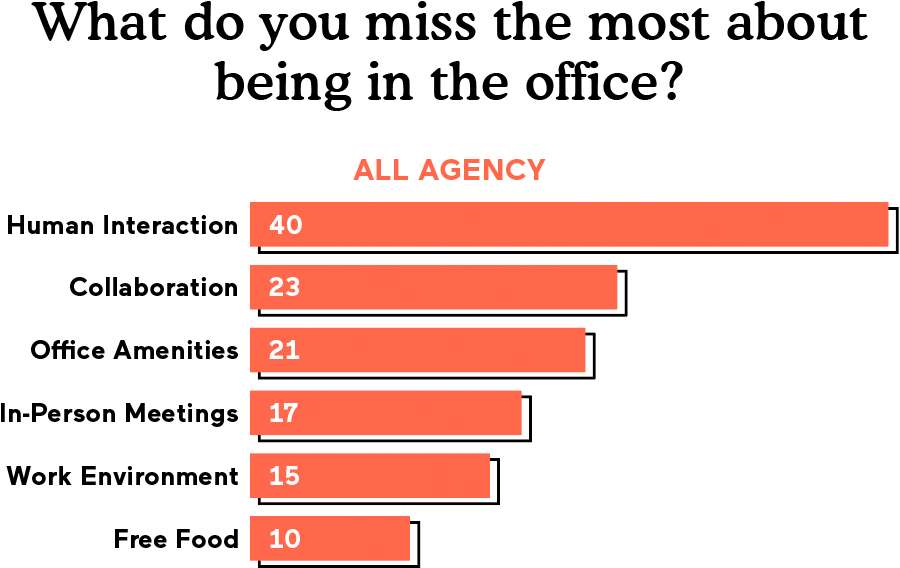 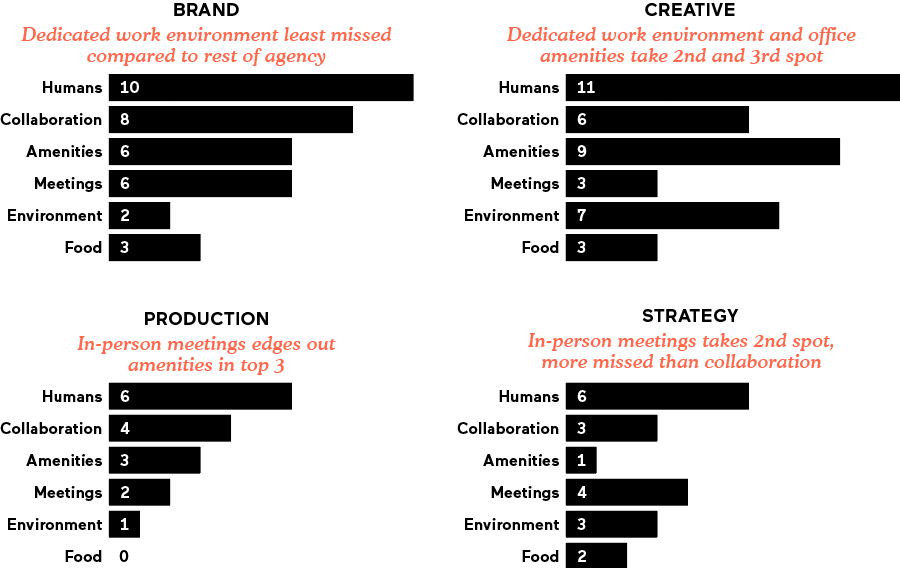 On the future Camp + King office, results showed that people neither wanted to work from home 100% of the time, nor return to the office full-time. Flexibility was essential.

It was interesting to see how results varied by department. Creatives were more efficient than ever, but least liked working from home. Strategy was the opposite, spending more time on the same amount of work, but okay with working from home. 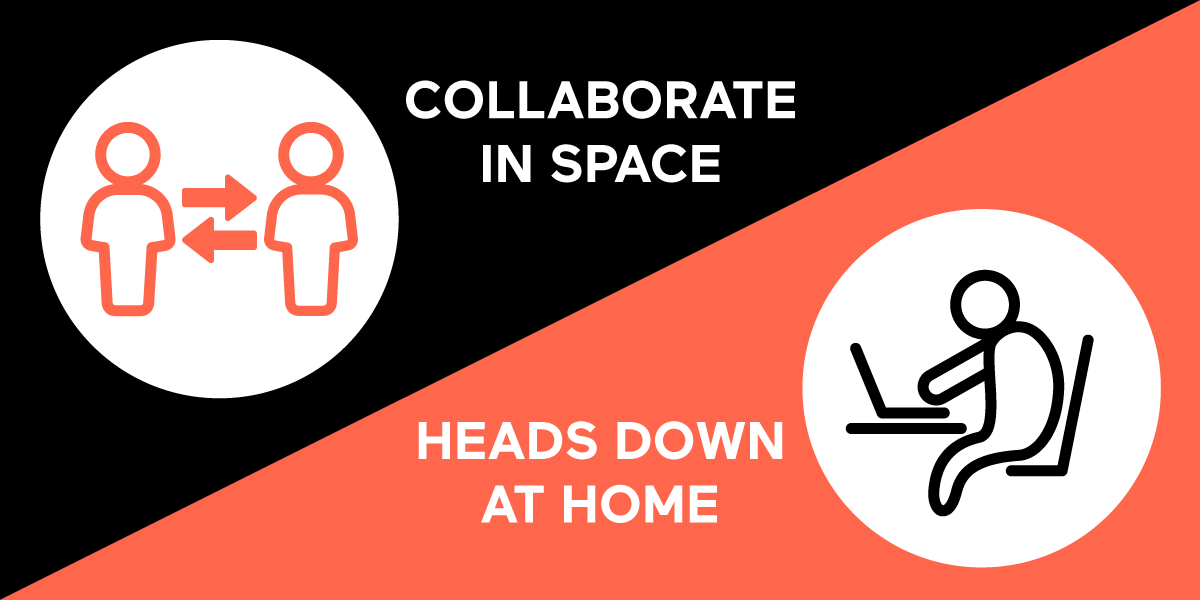 In essence this approach combines the best of both worlds – leaving us more alone when we need to be in the zone and bringing us more together when we’re together. Doing so means a recalibration of our office space and how we work at home. Here are key aspects Camp + King is thinking through to best fulfill Collaborate in Space, Heads Down at Home.

The Presidio is part of Camp + King’s identity. It’s a (literal) breath of fresh air for our team, our clients, and our partners to come to. And now more than ever, being surrounded by the Presidio’s beauty is a respite. We won’t be leaving anytime soon.

The office will be designed not to turn your head down but to look at a coworker. Our current office layout is optimized for big meetings and individual work time. The new space will promote coming together by prioritizing areas for brainstorming and concepting. This means an open floor plan with less workstations and more collaboration pods and nooks.

When you concept in person, there’s a lot more room to digress and explore because you feel like there’s freedom to chase random thoughts. What creatives need is space and time to play.

The Camp + King kitchen was the social center of the agency. It’s a space to eat, drink, vent, gossip or even hold impromptu meetings. The new office layout will super-size our eating space – making it an even more inviting place for people to congregate to.

The office of the future shouldn't be set-up like a factory line, it should be set-up like a clubhouse with function...a place that people want to go to, to hangout in but also one that promotes collaboration and creativity.

Camp + King’s Content Lab has unsurprisingly seen an uptick in work. From more animation needs to remote social content shoots, this momentum isn’t stopping. With less individual workstations, there will be more room to let our team work their magic.

Being at home has uncovered our ability to produce work remotely and efficiently produce smaller projects, which has opened the door to more creative ideas actually getting made.

We’ve recently implemented some guardrails to create a finer line between work and personal life. This includes limited email and internal meeting hours, a light-meetings Friday, and encouragement to block lunch and break time throughout the day.

I’ve learned the value of time affluence. Working from home has lifted the burden of being at a desk for a set amount of time. Control over my own time contributes to my happiness and productivity.

Truth be told, we don’t know when it will be safe to fully put Collaborate in Space, Heads Down at Home into practice. And once we do, we’ll have more learning to do. But overall we’re energized by the idea. We’ve been given a rare opportunity to rewire how we think about work that ultimately will lead to a more progressive and creative workplace.

Sally Kallet is a Senior Strategist at Camp + King, where she helps lead brand planning for RE/MAX and Jackson Hewitt.