In 2005, USA Today covered a new type of media, podcasts, describing them as “free amateur chatfests.” 15 years later, over 67 million Americans listen to podcasts every week, and there are over 1 million podcasts to choose from. What began as niche and scrappy radio-esque programming has become the new darling of audio entertainment, as well as a blooming arena for advertisers. 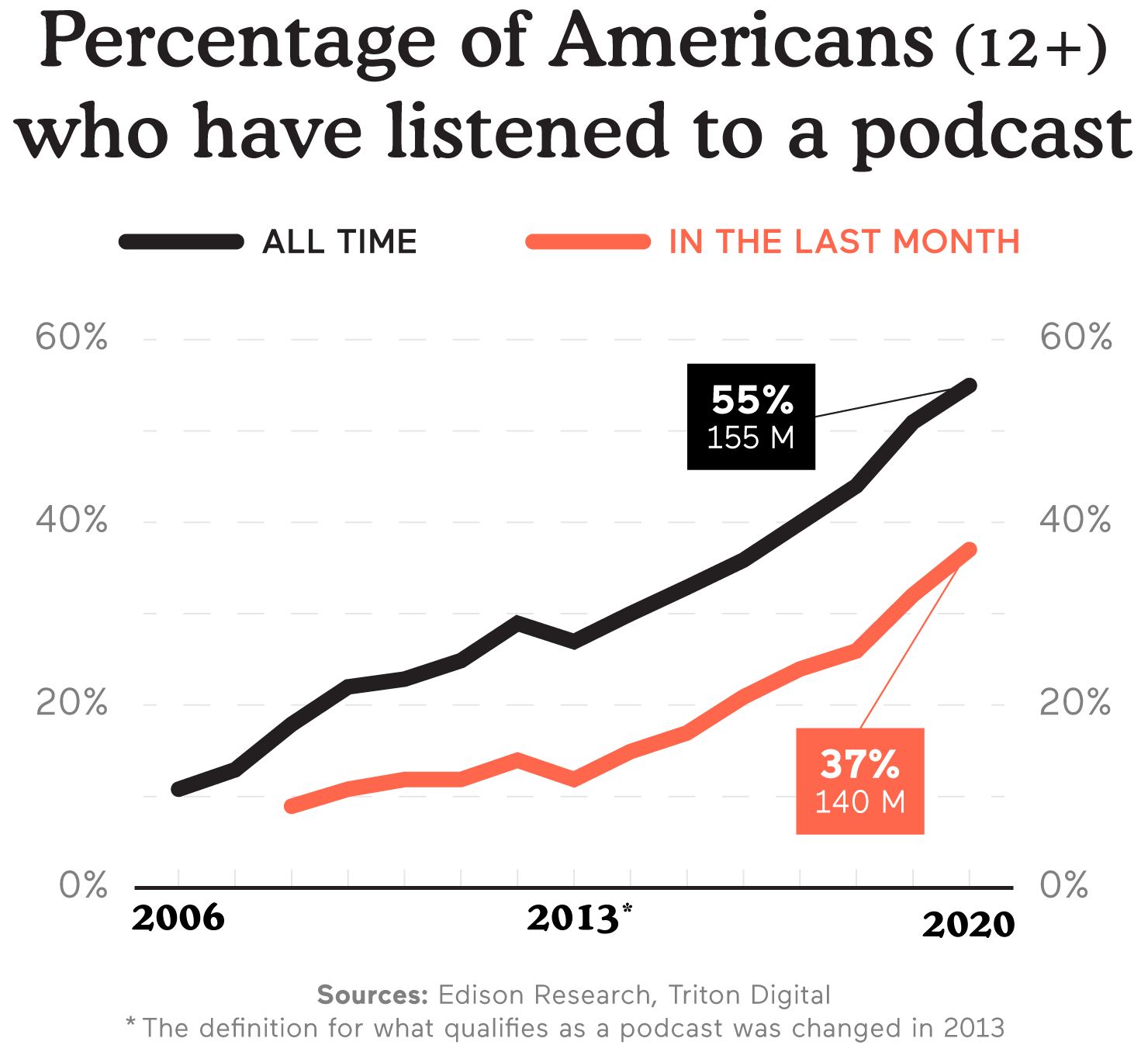 Why are people attracted to podcasts?

A good story’s a good story from the brain’s perspective, whether it’s audio or video or text. It’s the same kind of activation in the brain.

Because podcasts are generally in an interview or co-host format, they have an intimate one-to-one atmosphere. Listeners feel like they are sitting in the living room with the hosts and guests, which leads to a sense of familiarity and trust. This also means podcast hosts are choosier about their advertisers, which lends itself to more inherent trust in featured sponsors.

Education is the second most popular genre of podcasting, following Comedy (which, is often a veiled form of education). Compared to written media, podcasting allows for much more room to play in delivering information in an attention-grabbing way. Studies have shown that “dramatized audio” yields increased levels of mental imagery and the retention rate of auditory learning is 2× higher than reading.

Podcasting has exponentially expanded the topics traditionally covered in radio. The Apple Podcast app has 19 overall categories, the majority of which have subcategories. This range include podcasts like “The Pen Addict,” which features two friends talking about pens and pen-adjacent accessories. Another example, “Witch Please,” is two literature professors who give a feminist analysis on the Harry Potter series. There’s something for everyone, which also means there is great opportunity for brands to reach and engage with hyper-specific audiences.

In our proactivity-driven society, we are wired to consistently learn and do. This makes podcasting the perfect avenue to feed our brains while also being able to check off our long to-do lists. The majority of podcast listeners are listening while doing something else. 11% of podcast listeners even turn on programs while they’re working.1

If you aren’t already advertising, you’re late to the party

Podcast advertising quadrupled between 2016 and 2019. Why?

And the growth of the channel is showing no signs of slowing down.

Including podcasts in your media mix extends beyond simply placing pre-roll, mid-roll, and post-roll ads. Advertisers have found creative ways to insert their brands into podcast content to add value to their audiences while also paying off for the brand. For example:

“How I Built This” 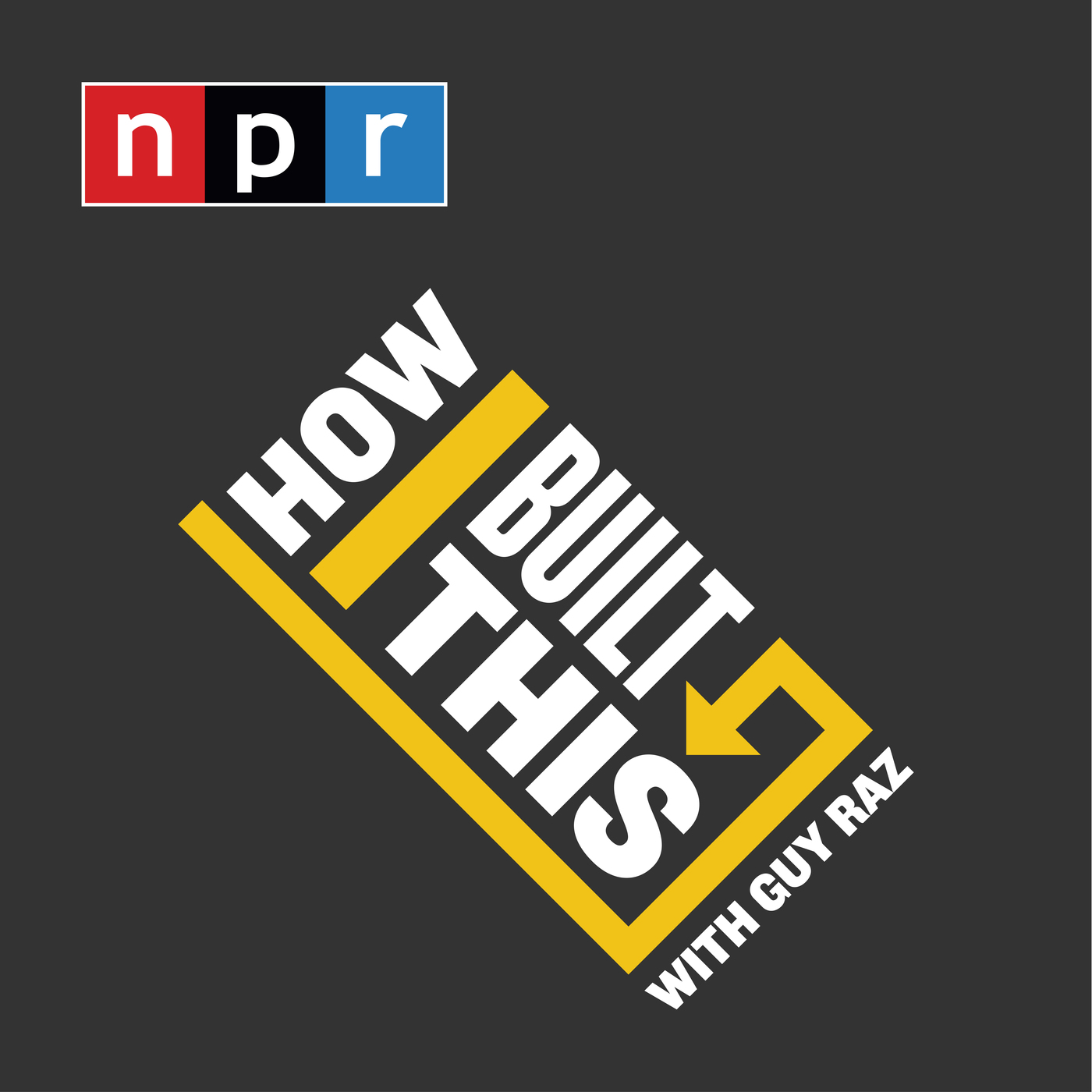 Company leaders are increasingly coming into the limelight as consumers look for ways to build a deeper and more empathetic connection with brands. “How I Built This” is a podcast featuring interviews with some of the world’s best-known company founders like Ben & Jerry’s (Ben Cohen and Jerry Greenfield), FitBit (James Park), and Birchbox (Katia Beauchamp). While the podcast is not a sponsorship opportunity, the founders get a platform to share not only their journey, but the values of their brand and their hopes for it. It’s a space for them to cultivate more intimacy between them, their company, and their current/potential customers. 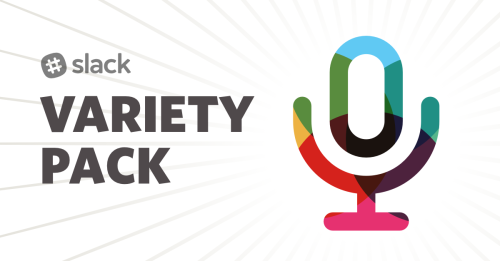 Slack had low brand awareness amongst its target audience, so it launched a podcast as a way to introduce the brand to consumers in the workplace. Slack knew that podcasters, eager to learn and life-hack, would be the perfect audience for its productivity-focused workplace app. The podcast features a mix of stories on work culture, teamwork, workplace innovation and how it fits in modern society. The content is aligned with Slack’s mission to change the way that people work forever—and each story is centered around such. The season had millions of listens. 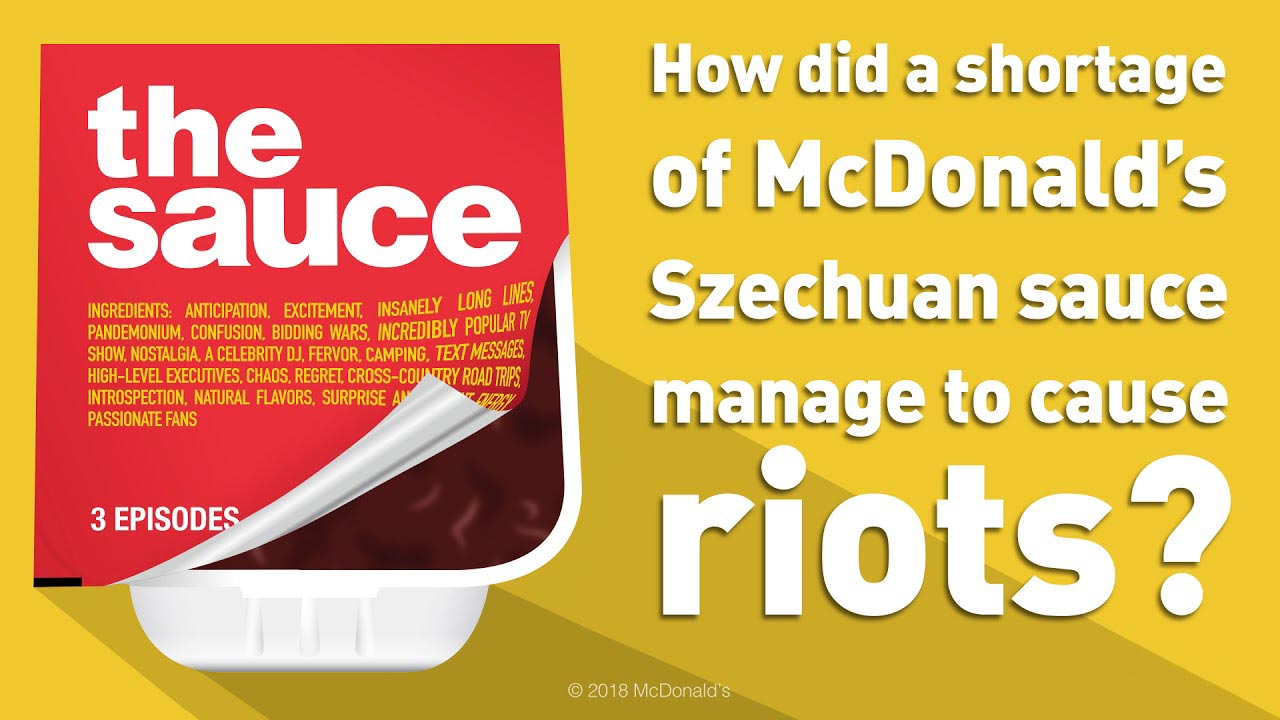 (this podcast no longer available)

McDonald’s announced it re-released its beloved Szechuan sauce via a three-part investigative podcast called “The Sauce.” The podcast, a mock play on the popular crime investigation genre, examined the controversy behind McDonald’s failed attempt at bringing back the Szechuan sauce months prior. It brilliantly capitalized on an obsessive (and angry) audience and gave a creative and transparent apology. The podcast made it onto the iTunes Top 100 Podcast Chart less than 24 hours after its release and McDonald’s reported historic levels of online conversation about the brand.

How your brand can get involved now

Whether a paid ad, sponsorship, branded podcast or executive interview, there are a handful of creative ways brands can utilize this quickly growing channel. Our advice: be useful, be entertaining, and connect with your audience before promoting yourself.

Sally Kallet is a Senior Strategist at Camp + King, where she works at the speed of retail for Del Taco. Last year, she led the team that launched Queso Pong (landing at #8 on the viral video chart). She also helps lead brand planning for RE/MAX.