On making the irrational, rational

Burger King has always played the role of a feisty challenger brand, looking for new ways to disrupt people’s fast food decision-making and just generally be a thorn in McDonald’s side:

Last week, Burger King found a new way to demonstrate its brand superiority—by making the Whopper look, well, a lot less super. As Burger King wrote in a tweet, “the beauty of real food is that it gets ugly. that's why we are rolling out a whopper free from artificial preservatives. coming by the end of 2020 to all restaurants in the U.S.”

the beauty of real food is that it gets ugly. that’s why we are rolling out a whopper free from artificial preservatives. coming by the end of 2020 to all restaurants in the U.S. pic.twitter.com/yQL6kAYZrY

What more effective way to demonstrate that a Whopper is no longer chock full of preservatives than by documenting its demise? Or, at least, that’s the thinking. The 45-second film opens with a Whopper being carefully built and styled. Then, a cinematic time-lapse shows the lettuce begin to wilt, the bun to grow heavy, before the science-experiment mold starts rearing its fuzzy head. The 1959 Dina Washington hit song, “What A Difference A Day Makes” provides the perfect musical accompaniment. 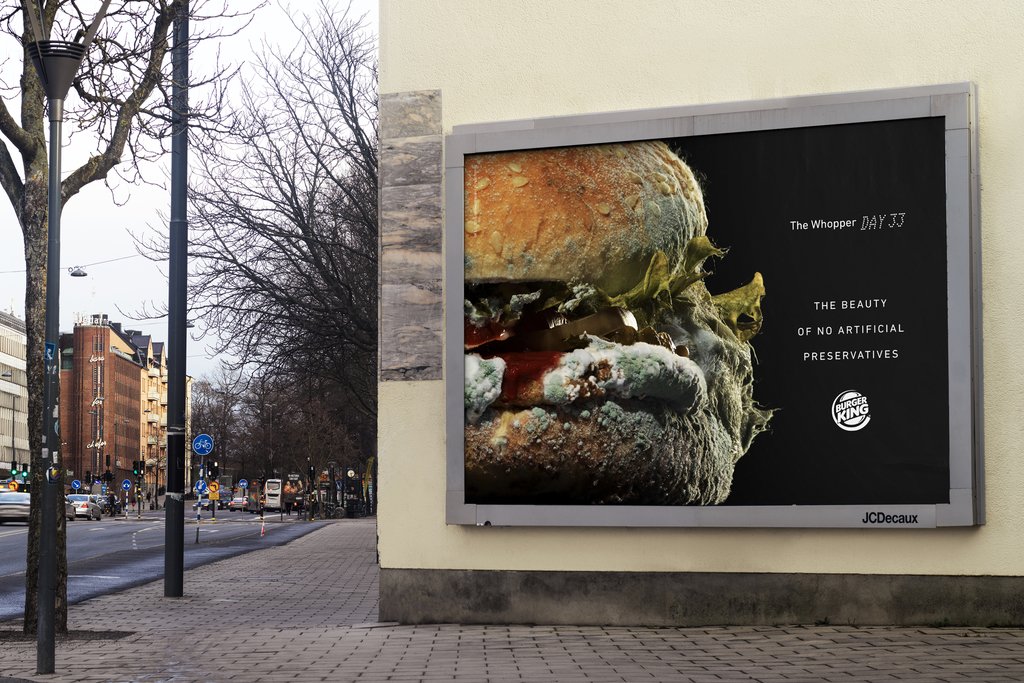 As AdWeek called out, “The chain’s anti-preservatives pledge breaks just about every rule in advertising.” The film style is equal parts disgusting and beautiful—and entirely fascinating (hidden deep in my id is a junior high-aged kid who admits to watching the spot a dozen times or so).

Excitement and coverage like that typically translates to a brand performing well in creative awards shows, but is no guarantee of sales. In fact, a survey from Civic Science asked 1,739 consumers how likely they would be to eat at Burger King now that some menu items are free of artificial colors and flavors. A whopping (pun-intended) 52% of people responded, “Not at all likely.”

That said, we’re anxiously awaiting to see the impact of Moldy Whopper on BK’s sales. At C+K, we believe that every brand, in every category is made up of two key components: Product Integrity and Brand Magnetism. Put more simply, the rational and irrational components of what attracts a consumer to a brand.

Some categories are inherently more rational, which means dialing up Brand Magnetism in communications can be very effective. The battery category is a good example of this, which is why C+K has been so successful in reimagining the iconic Energizer Bunny to create distinction from Energizer’s main competitor, Duracell.

Other categories are inherently more irrational—and in those cases, dialing up one’s Product Integrity can go a long way. Michelob Ultra is a fantastic example of this, as it zagged from traditional beer industry advertising, recognizing that its younger, more affluent, urbane audience celebrated a healthier lifestyle. Ultra tapped into this by expressing its Product Integrity in a unique way.

QSR brands are generally magnetic and largely irrational. Don’t get me wrong. There’s always been rationality in the decision to choose QSR—perceived value and convenience are factors that especially push consumers to fast food. But what we’ve found at Camp + King in years of working with Del Taco and more recently with Papa John’s, is that while rationality may drive someone to a QSR category (pizza, burgers, tacos, etc.), it’s irrationality that typically drives brand choice or menu item choice within that category.

That’s what makes this Moldy Whopper campaign so interesting to us. Will food decay (rationality) drive crave-worthiness (irrationality)? Historically, campaigns rationally touting good-for-you ingredients in products that are irrationally indulgent are ignored. Or, worse yet, these campaigns can actually adversely affect sales because people assume the healthier version of a product they love won’t taste as good. This is exactly what drove Kraft to wait three months to tell people that it updated the recipe of its beloved Mac & Cheese.

In true BK fashion, it turns out that the Moldy Whopper is also a dig at McDonald’s and its heavy use of artificial ingredients as documented by the hashtag, #lastburgerselfie.

The chosen bun 🍔 REYKJAVIK (AFP) – A decade after McDonald’s shut down in Iceland, thousands of online users follow the live slow decay of the last order – a seemingly indestructible burger with a side of fries protected in a glass case like a precious gem. More details on www.borneobulletin.com.bn #borneobulletin #borneobulletinsunday #worldnews #mcdonalds #bun #lastburgerselfie

That hashtag is assigned to an actual McDonald’s meal on display in Reykjavik—apparently the last McDonald’s meal served in Iceland before the business pulled out in November 2009. A decade later, the burger and fries still look more or less as first intended.

David Morrissey is the Director of Strategy at Camp + King. He started his career as a copywriter before transitioning into strategic planning for the likes of McCann, Leo Burnett USA, and Ogilvy + Mather. He’s never met a burger he didn’t crave… until now.