Influencers or Superfans: Which Has More Power?

It’s no surprise that influencers have a massive impact in our lives – whether we love them or hate them, they’ve forever changed the way we discover brands on social. But are influencers losing the credibility we once bestowed upon them? These days, it feels like every other post is a sponsored ad. Meanwhile, die-hard superfans are taking the spotlight, generating brand interest thanks to platforms like TikTok. So, which of the two is more influential? It all boils down to the level of authenticity and relatability of each that creates trust among audiences.

The world of influencers gets larger and more complex with time. In fact, there are four categories of influencers. So, what makes it about them that we choose to follow and trust the content they share?

Historically, brands have used mid to top tier influencers as a tactic to reach new audiences at mass scale. The problem: this has become an expected tactic and frankly, we can spot a sponsored ad from a mile away – especially when it’s the occasional 1x post that has no connection to the influencer’s lifestyles or interests. As a result, followers become critical of the influencer and the endorsement he/she is making. However, if the brand’s goal is to drive mass awareness, when done right, partnering with these influencers is effective. A step after that, we can even ask influencers to drive their fans to a site or use a coupon code but only if the brand or product ties back to the niche of what this influencer is known for.

Nano and Micro influencers are different. Partnering with them gives brands the opportunity to create long-term partnerships, given the costs are much lower than partnerships with mid to top tier influencers. Plus, low-tier influencers boast stronger engagement with their followers. But are they trusted? Yes. Most of them are in the early stages of growing their following and they likely haven’t worked with too many brands yet. Because of that, they develop stronger relationships with their existing followers which creates trust among fans. This then makes those fans receptive to trying a brand the influencer recommends. 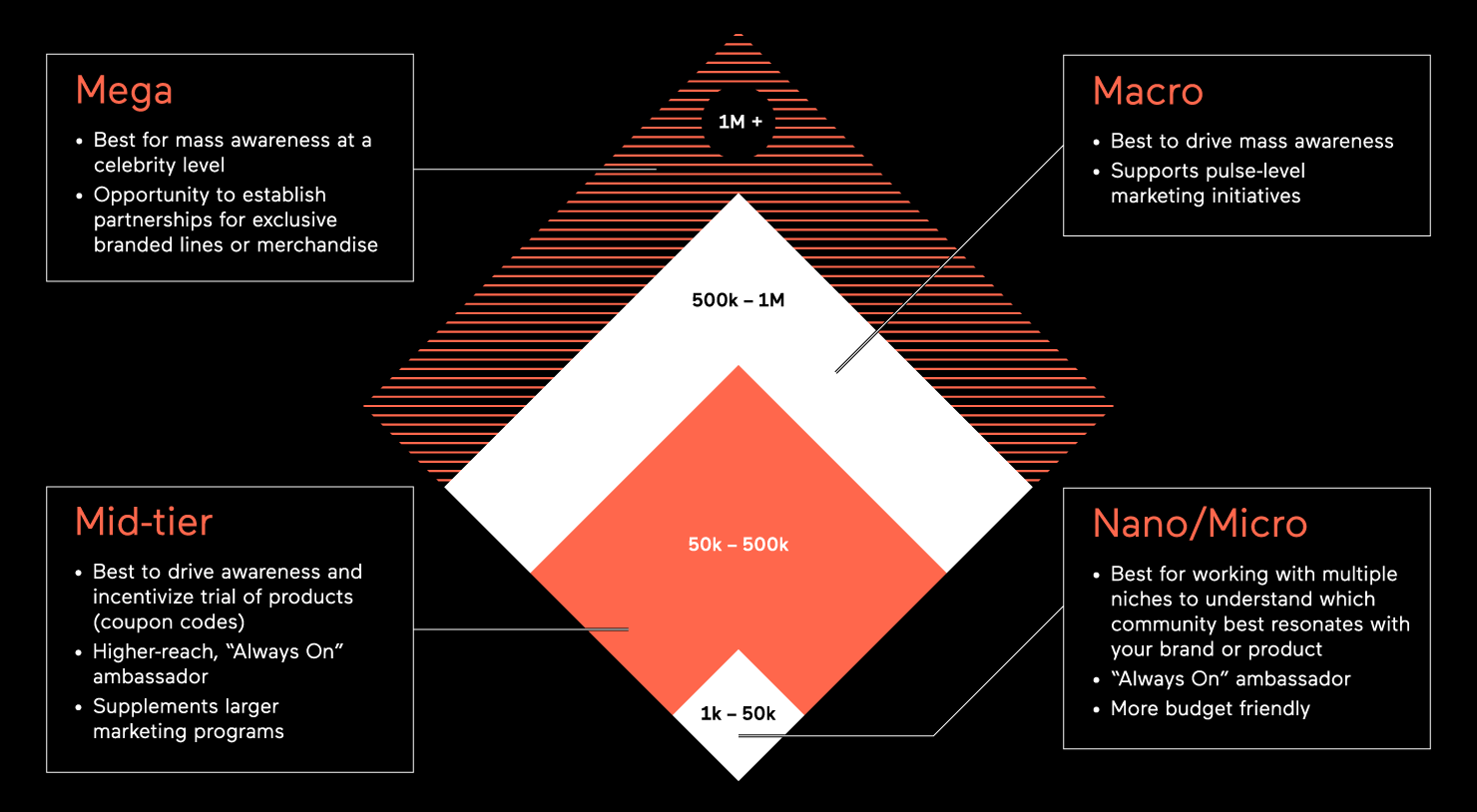 Like influencers, Superfans come in all shapes and sizes. They can span from your most avid community members to creators who are visually showing the brand in their day-to-day. What sets these apart is the level of authenticity and relatability they evoke (often at no cost from the brand) making them trustworthy.

If your brand has built an active community, then you likely noticed fans who frequently chime in the comments of your posts or tag you in their content. They have a smaller reach but because they’re an everyday person, that has a lot of influence.

Brands like Burger King, Airbnb, and Microsoft often turn to fans who mention them to amplify those voices and generate additional brand love on social. What’s great is that those voices are believable. The brand didn’t ask them to create it, let alone pay them. It’s authentic. Even if you didn’t like that brand, you can’t argue the comment is a fluke. It’s a real person and that itself is believable, even if you don’t agree Burger King has the best chicken nuggets.

Waaaayyy before TikTok rolled out any ad capabilities, TikTokers were Gen Zers seeking to be entertained or freely expressing raw moments of culture through their eyes. This of course included cameos of products, services, or their attitudes about brands as lived in their day-to-day lives. In fact, a recent Nielsen study found an average of 64% of TikTokers said they can be their true selves on TikTok. Additionally, 53% of TikTokers globally said they trusted others to be their real selves on the platform. So when a brand or product is seen on a TikTok, the authenticity is real. Brands aren’t paying them to talk about it. As a result, a plethora of TikToks emerged (and continue to do so) with glimpses of products here and there. Though the brand isn’t the star of the TikTok, it’s subtly seen in the background. These creators are Superfans with genuine brand love.

By now, we all know the story of Charile D’Amelio and Dunkin’. Long before the brand approached her, Charlie was often seen taking a sip of her Dunkin’ coffee before doing one of her dancing TikToks. She’s a perfect example of a Superfan turned brand ambassador. And if you followed her content, you’d never question whether she really liked loved Dunkin’. Just like Charlie, there are other Superfans out there creating content, some who have successfully built their own businesses out of it, and the potential to generate a larger impact is real.

The swirl is real. @charlidamelio fave drink is officially on the menu! Go order ‘The Charli’ 🙌🙌 #CharliRunsOnDunkin #dunkin

So there you have it. Although the low tier influencers continue to carry credibility, there’s growing power behind the Superfans. If you proactively monitor those Superfan opportunities, you may find this approach works better for you and your brand. Meanwhile, using influencers can effectively act as supplemental pulses supporting a campaign.

Denisse is a Senior Social Strategist at Camp + King in San Francisco leading social for clients like Papa John’s and Energizer. Working in social media since the early days of Vine, she loves exploring the intersectionality of social as a conduit to creativity, community, action, and storytelling while embedding a diverse perspective.